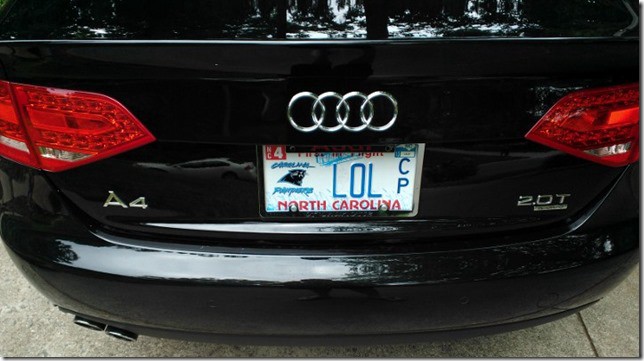 Back in March I bought a new car. Per the norm, I decided to get a Panthers license plate — NC offers ’em for a cheap annual fee & I’m a huge fan, so why not?

Most of the others I’d purchased were just regular — not with customized text…in fact, I typically think most people with customized text plates are ridiculous — most of them you can’t even understand, because someone decided to take a phrase and turn it into eight consonants that may or may not phonetically sound like the original phrase. It’s like playing telephone with Helen Keller. But I digress.

This time I decided to go with something a little better. A good friend (who, unfortunately, moved to Seattle) was both a huge car nut & a bit geeky — we both enjoyed internet culture, and, seeing as LOL as a standard NC plate was unavailable, I elected a combination of two awesome things: internet + the Panthers.

I was quite proud of myself. Then it arrived. And I realized…

People will immediately think I’m LOLing at the Panthers. This would not be a problem if they were doing wonderfully. Unfortunately, over the past few years they’ve been doing the opposite…so I would go run errands, terrified that someone would carve ‘HA HA HA’ in the paint, or leave me a nasty note.

I get a lot of people taking pictures of it — in traffic, in parking lots, all over. The traffic ones really make me nervous, as I’m not sure if people are snapping a picture because they are entertained or because they’d like to see my head on a stake…

So to set the record straight — I’m not LOLing at the Panthers. I am, in fact, a huge fan — I just didn’t quite think it through when I got the plate. But I’ve decided to keep it. I think the only plate I’d want to replace it with would be ‘PDLONRT’ — yes, that jumble of letters is supposed to be ‘PEDAL ON RIGHT’ — but since it’d only be useful on the front of the car (to signal the minivan hell I drive through every morning to get to work), I’ve elected to keep the LOL.