Hacking on the On-prem data gateway for GCC-mid accounts

I had an interesting one come across my desk here at WTF HQ earlier this week - before I knew it, I was up to my neck in decompiled data gateway code. Here’s my adventure with fellow spelunker @vstaropoli.

A cloud for every user, on every device, running Microsoft software

In the 70s, in the nascent days of Microsoft, Bill Gates said:

A computer on every desk, and in every home, running Microsoft software.

A quote that lives on in spirit today. Only now we’re talking about clouds. There are lots of clouds at Microsoft - Office, Azure, Dynamics, plus lots of variants for things like the US Government, China, etc. Today we’re going to explore a bit of the terminology you’ll hear, but more importantly, share a hack to unblock you if you’re using Azure commercial cloud with on-prem data gateway but may also be using GCC Mid.

A lot of new terms to define - things that are related but not the same. Note that this isn’t the exhaustive list, as there are still others (like Azure China).

Power BI also has different flavors, for different clouds. You can read more about those here. Specifically, Power BI has a GCC version (aka GCC mid). 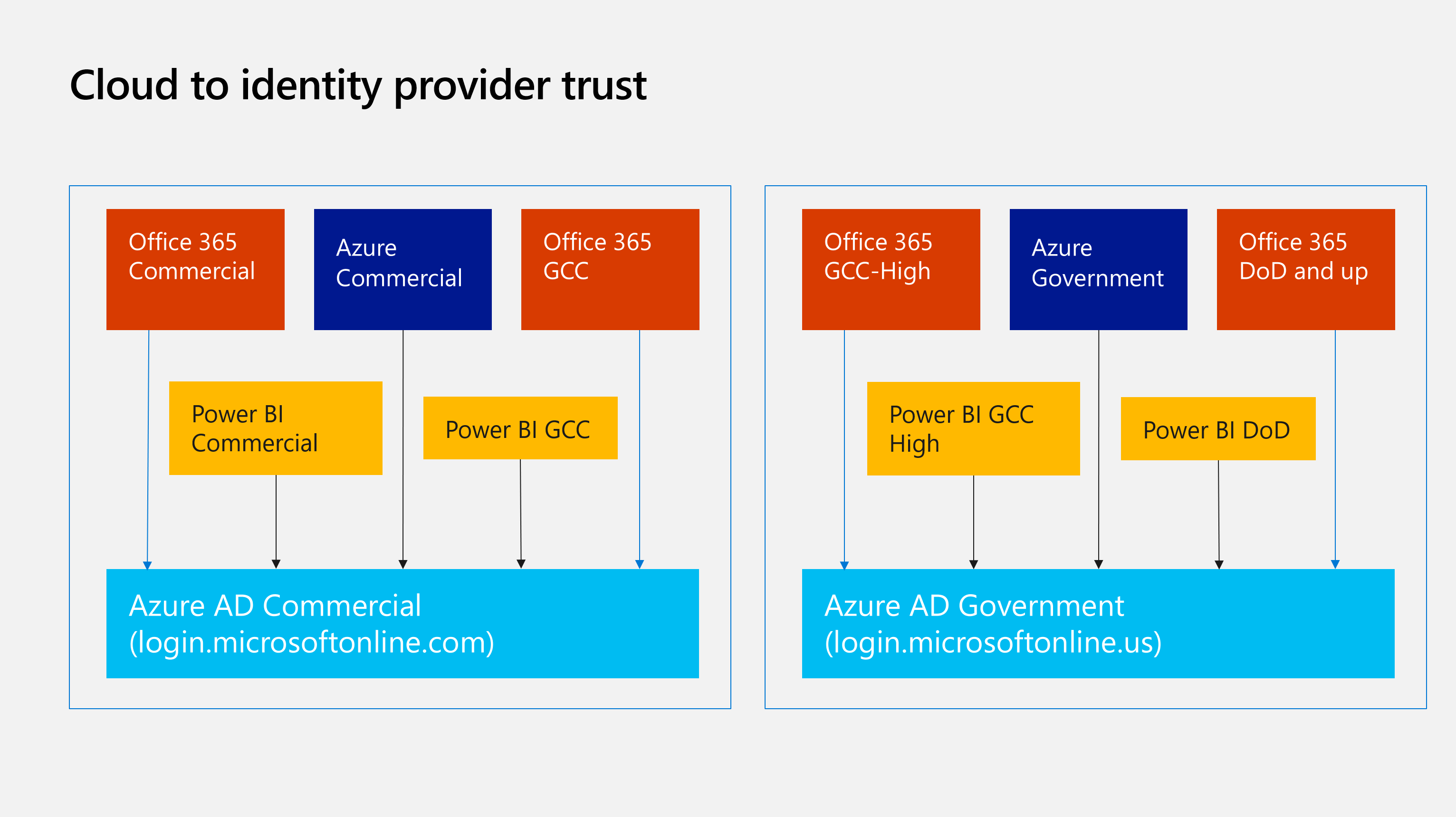 So many terms with very similar names - Azure, Azure AD, Azure AD Government, Azure Government - it gets confusing very quickly, so precision is critical. Today we’re going to explore the on-prem data gateway, which was historically used by Power BI for accessing data sources the Power BI service couldn’t access directly - like a database server running in your datacenter or an Azure VM you didn’t want to open up to the internet. Think of it like a relay, with an agent installed somewhere that has a network path to the target servers. Over time, the scope of the tool has changed to add more services. You can use the OPDG for connecting things like Power Apps, Logic Apps and Azure Analysis Services to remote data.

Sadly, this is where things start to break down for GCC Mid users. Since GCC mid users are using Azure AD Commercial, they also use Azure Commercial for Azure resources (like Analysis Services). Unfortunately, when you type in a GCC-mid account, you lose any ability to connect to Azure Commercial - today, the guidance is to use ETL to move data between enviroinments, or use SSAS in a VM. But I think we can do better 😈

Since my buddy had called me about this nearly a dozen times, I figured it was time to roll up the sleeves and get to it - so we cracked open the configuration tool and started poking around. There was an assumption that the installer tool must be doing something as we could login with a commercial account and everything was fine, same with a GCC High or Government account - there was something specifically happening in the installer for only GCC-Mid users. We started by decompiling the configuration tool, which was luckily dotnet. This made it easy to use tools like ILSpy or JetBrains’ dotPeek to take a look at the code and see just what was happening.

Note I will never ever use or suggest red-gate after what they did to .net reflector, and I’d suggest you don’t either

Turns out, there is some logic happening in the installer, specifically for setting environments! This is promising - it means that there must be some way to override, or at a minimum, start man-in-the-middling this traffic to tweak to our whims. A bit more digging and we stumbled upon a configuration service - a remote configuration service - which means it’s ready to be fixed. It’s actually a fairly straightforward issue - in essence, when this discovery service looks at a user’s user principal name, it sends Power BI (or other services, like the On-prem data gateway) back a payload of account information - notably, endpoints. Let’s take a walk through a couple of different scenarios.

Here’s a normal user, someone who uses Office, Power BI and Azure Commercial. No government user here. The values are as we’d expect for a normal user - all commercial/public endpoints.

Here’s one for a GCC-High or DoD user - note all of the endpoints are Azure Government related. usgovcloudapi.net and *.us is a sure giveaway here, although there are plenty of docs for cross-referencing Govcloud endpoints.

And lastly, here’s the main one we’re concerned about: GCC (or GCC-Mid). Remember from earlier - a GCC user uses Azure AD Commercial and Azure Commercial, not Azure AD Government or Azure Government. But look at what gets returned for a GCC-Mid user:

Which means that for a GCC-Mid user, this API is mistakenly sending users to an all-government environment even though there are cases where a ‘government’ customer (e.g., GCC-Mid) is using Azure Commercial endpoints. If we look through this, we can cobble together our own, correct ‘environment:’

Now we need to deliver this to the gateway during installation

This is probably the uglier part of this whole thing - now that we have a hypothesis of what we should send to the gateway, how do we intercept that call to inject our own stuff? Stuff like local DNS hijacking would work here, but since we really only need to tweak a single request it seems like a bit of overkill. Instead, since it’s only during setup that we need to deal with this (and setup is already interactive), we can do it interactively with an HTTPS proxy. I personally like Fiddler4, with HTTPS decrypting turned on, plus the auto-responder. It makes this much easier to deal with.

First, make sure Decrypt HTTPS traffic is turned on (Tools –> Options –> HTTPS tab). Once you check this box, you’ll need to add Fiddler’s certificate to the trust store, which Fiddler will prompt you to do; remember that at this point, anything flowing through Fiddler will show a valid cert, since fiddler is terminating and re-wrapping the traffic with its own cert, which is now in your trusted roots. 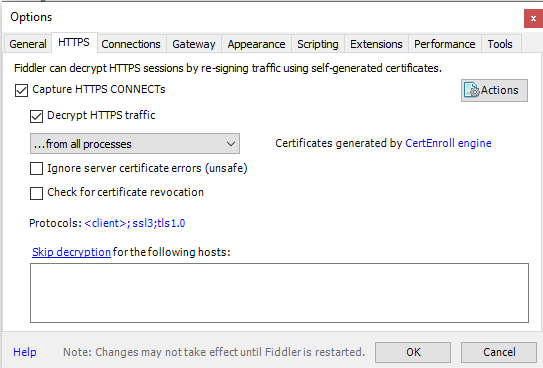 Next we want to use the auto-responder. This makes it super easy to let fiddler respond to certain requests that match a pattern. One easy way to do this is to let it go once, find the API call in question, then use that response as the base we’re going to tweak.

To start, run the OPDG installer and at config time, make sure Fiddler is running. You can make it easier to find relevant traffic by using the bullseye and dragging it to the OPDG configuration tool, but not required. You’re going to want to look for something calling api.powerbi.com - this is the request we want to fiddle with.

Once you’ve gotten one, I find it easier to copy the entire response out of the ‘Raw’ tab - this makes it easier to use later in our autoresponder rule. Copy out the raw body and drop it in notepad or similar. Next we want to create an autoresponder rule. There are lots of different ways to create rules, but luckily we have a relatively specific request we are looking for that, seemingly, isn’t used elsewhere. Our URL matching rule then is quite simple:

Good idea to click ‘test’ here to make sure your URL rule will run based on the URL.

When you click save, the ‘Create new response…’ window will open, allowing you to drop in your new, modified response. Here’s where we want to take the earlier response and update it to use the correct Azure Commercial-related URLs: 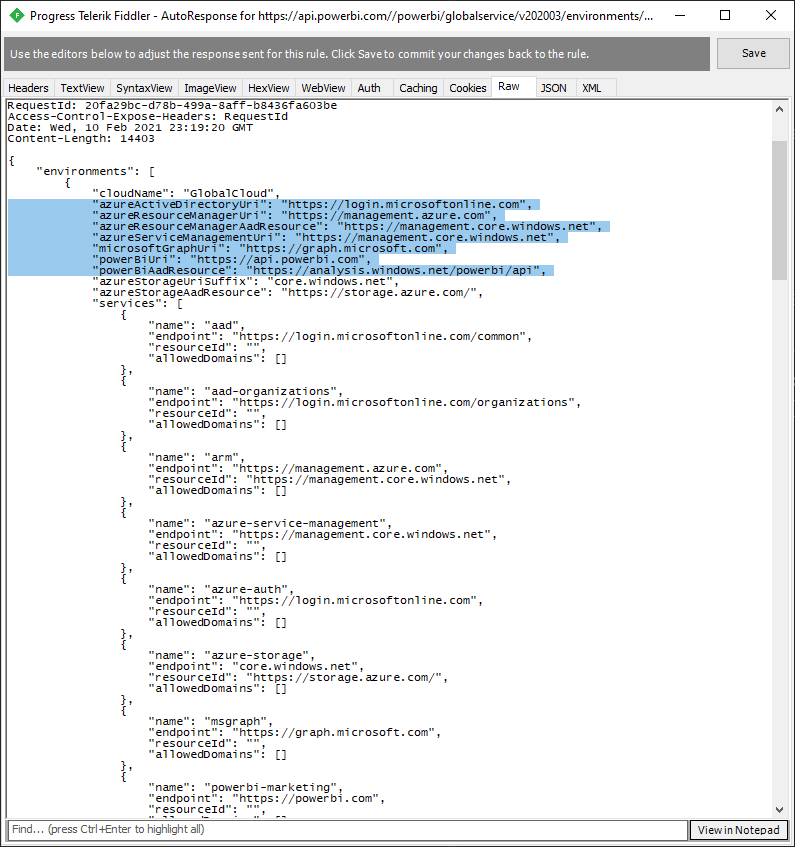 Note there is a lot of extra stuff in the response that stays largely untouched. We only need to modify the items in ‘Our new payload’ above and keep the rest the same. Once you’ve done that, click Save.

Once you type in your email address, you should see your rule get hit - at which point, configuration will continue as normal. At this point, you can turn off/close Fiddler, as we’re done with it. Now that the gateway is configured to use the Azure Commercial endpoints, the configuration process continues on normally, as if you were a commercial user. When you go into the portal to create the cloud gateway component, you should see your OPDG we just created as an option during resource creation.

While this is a bit of an ugly hack, it does enable you to start using the on-prem data gateway with Azure Analysis Services and Logic/Power Apps in Azure if you’re a GCC mid customer. No idea as to the long-term supportability of this, but we’ve raised the issue and hope to see this built into the logic in the future. Happy hacking! 👍